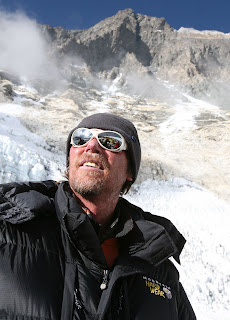 We're going to Camp twelve and we need 4500 bottles of oxygen..that's what I was shouting out to all the Sherpas around EBC today as I was announcing to get ready the summit push is on starting tomorrow. Phu Tashi from Peak Freaks will be in the summit fixing team along with 11 other Sherpas who will leave camp tomorrow and if all goes we'll will be pushing through to the summit in a few days. The other teams involved in this effort will be from IMG, AA, AC, Patagonia Bro's, Jagged Globe, Mountain Trip, Seven Summits, Indian's and Asian Trekking.

It looks like 100 Sherpas or so will be pushing loads over the next few days to stock camps, it's going to get busy up there as we've had a bit of down time with the re-route but it's not any different than how we would climb if bad weather had set everyone back, we are still on track time wise, shouldn't be any concerns of bottle necking, we have up ropes and down ropes from lessons well learned in 1996 where there was only one rope used for up and down due to unfortunate circumstances.

Lhotse: Now that we are getting a bit of snow, still not that much but every little bit counts to glue things together in particular on the route up to the summit of Lhotse- eyes are starting to turn that direction.

Spirits are high around camp, we've been having a lot of fun. Today I took my Ipad around took some photos of our Sherpa staff and we played with the Photo Booth App, I had them in stitches as I distorted their faces with the program, tears were rolling down my face in laughter watching them crack up. Lhakpa Gelgan couldn't look at me the rest of day because he couldn't quit laughing. We ended the day with popcorn and played several rounds of cards.

Second wave trek group: They are currently in Lobuche and will be here tomorrow. Good timing, they will be able to give our team a good summit push send off. We still have one more group coming in 6 days time and that will be it for our spring groups but we will be back once again in October with our "Triple Crown" Everest Training climb and Everest Base Camp treks in October.

That's all for now... over and out.. Tim Rippel

For more... refer to our website: Peak Freaks
Posted by Tim Rippel at 10:00 AM