NOTHING IS NORMAL!.. Everest and holding..

An emergency head honcho meeting today. We've got situation.... it's been a slow process watching the white 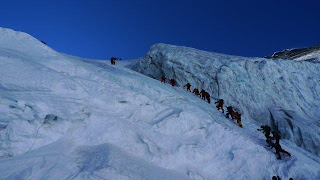 disappear up here over the years. We were first out of the gate again this year as a team and we were very lucky that no one got hurt in the process. We keep our teams small for many reasons and two of them is putting the importance on team bonding and climbing as a tight unit for personal safety.

Our camp got put in at Camp 3 in good time with many thanks to our hard working Sherpa crew, and the fact that we had a perfect weather opportunity that kept us climbing underneath the jet-stream that we were watching. Our team spent 2 nights at Camp 2 under stars and very light to calm winds before ascending to Camp 3 the next morning early, and were back at Camp 2 before the jet-stream moved down lower on the mountain, just exactly how we hoped it would work. The team got hammered pretty good this night but it all worked and they were down safe at EBC the next night.

The few days before when the Sherpas were carrying our equipment and fixing rope to Camp 3, the mountain was 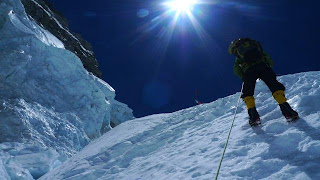 holding tight, just a few skiffs here and there. By the time our team got on the rope and started to climb it was good going up but things started to change for the way down a couple members took a hit with some smaller rocks and they began to down climb very softly and by the sounds of it it's only going to get worse unless we get the right mix of snow and temperatures. The situation is that each time a climber pulls on the rope because of the lack and ice and snow holding things together, crampons and rope starts to dig into the rocks and sends them down the route straight on to climbers coming up.

The only normal I see right now is that this meltdown is happening all over this wonderful playground we've enjoyed for so many years. We used to climb Ama Dablam till a chunk fell off the hanging glacier, the Dablam and changed the way Ama Dablam is climbed today, so we moved over to Pumori, it's higher and ice was not affected by melt yet, but as of last autumn we are forced to call it quits playing there for the same reasons we see on Everest now. Our last Pumori expedition gave us enough warning signs to move on as we could no longer offer safety to our participants there. Now, Everest being the highest and coldest we didn't expect it to deteriorate so fast, but it has.

Route finding is key for an accomplished mountaineer and we had a tent full of them this afternoon, we all gathered to discuss options. I could see a possible solution to move out to the far far right and up and far right again. I brought our teams photos of what they saw up there and David Breashears also joined us. He had been out flying around getting shots for his "Melting Glaciers" documentation and we could see that the route I suggested was a good one but at the end of the day we didn't get any resolve because in order to get up to the Col climbers will still have to traverse the rocky area to get up to the Col.

It's not all gloom and doom. There is a fix if we get the perfect mix of snow and warmer temperatures. Getting it perfect is a huge factor in decisions that will be made in the next few days or even weeks. Right now if it snows and if there's wind it will just blow off again. If we get too much snow that won't blow off, then we will have avalanche concerns which could take it back to ice and we will have not gained any ground.

So in the interim, the route to the summit is a long ways off till we know what the weather is going to give us. I spoke to a climber from India that speaks of an ancient monsoon predictions tool and it's said to show an early monsoon. Everything Becky and I have been researching only indicates the monsoon will be normal this year, meaning the monsoon will come, but when exactly with this tidbit is not known. It almost looks the window of opportunity is right now, the winds are down as far as we can see in the reports so could this mean the monsoon will follow right after it which it typically does but usually not till the the third week of May. Who knows? we sure don't.

We are grateful we don't have teams up at Camp 2 pondering what to do, our Sherpas are pulled off the mountain for the time being. Our team are all happy campers enjoying vacation life Pheriche except for Marty, Joshua, Ben and I who are holding tight here.

Check out Nelson's video on our website and compare with photos we have on FB of what we're dealing with here. Not too sure about the choice of song Nelson..... the music is hot but the lyrics are a bit strong.

New photo collection of Lhotse face and Camp 2 loading on Tim Rippel's FACEBOOK today, Friend me if you haven't already.

For more: www.peakfreaks.com/everestnews2012.htm
Posted by Tim Rippel at 12:04 PM